It's a Fact: Smoke Alarms Save Lives

The majority of fatal home fires happen at night when people are asleep. Smoke alarms give you time to escape.

Many of the homes that we visit during the year either do not have batteries in their alarms or they have no alarms at all.  Please contact the fire station if you have questions about smoke alarms or if you need assistance in changing your batteries. We can evaluate your home to determine the best location and how many detectors you will need.

How to Test your Smoke Alarm:

Press and hold the test button on the smoke detector. It can take a few seconds to begin, but a loud ear-piercing siren should emanate from the smoke detector while the button is pressed. If the sound is weak or nonexistent, replace your batteries. 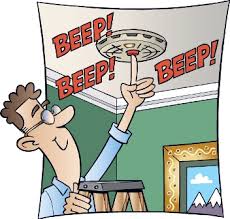